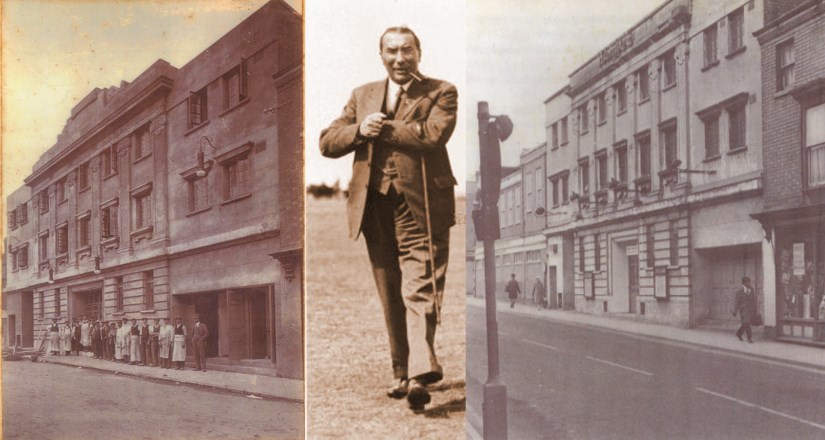 Here’s a colourful walkthrough of our 103 year history!

The Palace Theatre first opened its doors in August, 1913, a comparative latecomer in the wave of new theatre building in which public demand for entertainment had been finding expression since the beginning of the century.

Described as a miniature opera house of classic design and seating, at that time, 660 it boasted every modern facility of the day. Mr H K Hayles was the managing director of the company, the Redditch Palace Ltd and it appears that the cost of building the theatre (which was cited as £9,000) may have been raised by private subscription.

The company that built the Palace was G C Huins and Co and it seems they retained a financial interest as late as 1947, two apparent members of the family being cited in the financial returns;

Sidney L Huins as a Director of the theatre company with about 250 shares, and Nellie Louise Huins being a major share holder holding some 650 out of a total of 3,500 shares issued

The theatre architect chosen by the Potteries entrepreneur Mr H K Hayles was a leading exponent of theatre design Mr Bertie Crewe. The theatre was upholstered in excellent taste by Messrs Wolff and Hollander based in London.

The Palace Theatre used to be a Cine-Variety house which meant that it combined films and variety entertainment on the bill. Until 1929, The Palace ran a mixed bill of fare, but in February of that year, it was being advertised as Palace Super Cinema in April 1930 a Western Electric Sound System was installed and ticket prices were raised to 6d (Pit) and 1/-(circle), due to the cost of installing the new Talkie apparatus.

In 1939, at the beginning of the war the Palace closed in common with places of entertainment elsewhere, but by 1940, was fully in operation with the usual entertainments.

In the late 1940’s, films took a back seat at the Palace. Jack Leuty took over the management of the building and ran a series of theatrical entertainments; this lasted until 1952, when new management took over under Mr S G Williams.

By 1954 the lack of artists, good touring shows , rising costs, coupled with the start of transmission of BBC television from Sutton Coldfield and the ease of purchase of sets, all conspired against the independent theatre operator, so much so that on the 19th March 1954 the Indicator ran a report ‘Can the Palace be kept open?’

In May 1954 came the shock announcement “Palace to Close Down” ran the headline. Councillor J R Wilkinson, the owner stating to the Indicator – “The town has lost interest, I cannot afford to stay open”

The Palace was to re-open on 21st February 1955, as a Roller Skating Rink , the raked floor had gone the stage etc, all altered to suit this new form of public entertainment. By 1959, the Palace Theatre became a Dance Hall, from then it led a life in mixed use, including in the late 1960’s being used as a Bingo Hall.

In 1967 the Development Corporation bought the Palace and handed it over to Redditch Urban District Council, it opened on September 11th 1971 with a show called Between the Bars featuring that master musician Donald Swann.

By 1970 the fate of the Palace was more or less settled. Multi-Entertainment Centres were now being thought of in other areas and with Redditch being a developing town it was decided to refit the Palace for theatrical use.

It was opened by Mr Peter Walker MP, the Secretary of State for the Environment, on the 11th September 1970, Still retaining the Palace name it became a multi purpose venue. Seats in the stalls were now stackable, allowing for many uses of the floor area. Other additions included moving the dressing rooms from the front of the building to the side taking over what had been part of Shrimptons Needle Factory and adding the present foyer extensions. Administration offices were created where the dressing rooms had previously been. In 1975 a Buy a Seat Campaign was launched and the stalls were fitted out with new seats.

In 1982 a private theatre group took it over under the title of the Mercian Theatre and Arts Federation but a report in the Indicator and Chronicle in April summed it up after only 60 people turned up to see a concert. Just five of them were from Redditch.
“The fate of the Redditch Palace is in the hands of the audience.”

The Redditch Borough Council took over the management and running of the building in 1985 and since then has continued a tradition of providing a wide mix of entertainment to please every palate.

When Mr H K Hayles engaged the services of Mr Bertie Crewe to the build Redditch’s Palace Theatre, he was engaging one of the most dynamic architects of the 1890’s -1900’s.

It has been suggested that Crewe worked during his formative years in the practice of the nationally renown theatre architect Frank Matcham, although no concrete evidence has ever been produced to substantiate this.

His architectural education was from the office of Clement Dowling, London and at the Atelier Laloux, Paris. Crewe specialised entirely in theatres and, subsequently, cinemas. His buildings are typified by their florid, and at times almost wild splendour, coloured by a mannerist Baroque, which was probably influenced by his time in Paris.

By the time he came to design the Palace he had been involved in over 40 theatre building projects, and was at the height of his architectural powers. As an architect his body of work was prolific having been involved in the planning or collaboration of nearly 200 theatres/cinemas.

In 1914 there were over 1,200 working theatres in the British Isles, in 1982 Curtains!!!! or a New Life for Old Theatres estimated that 85% of these had been either demolished or irretrievably altered. More than twenty years later the statistics are unquestionably worse.

Theatre’s designed by Bertie Crewe, and remaining largely untouched are now extremely rare. He is known to have designed or modified over fifty , yet only thirteen survive, of which only six can be wholly attributed to Crewe.

This clearly defines the Palace as a theatre of national importance, a significant historic theatre built at a time when theatre construction was beginning to decline, and cinema construction was just starting, it looks both forwards and backwards, standing at the crossroads of building design.